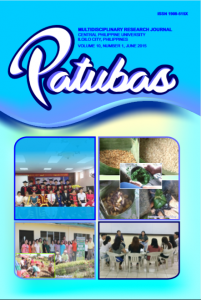 Copyright © 2015 by individual authors and Patubas.

This study evaluated the impact of Central Philippine University (CPU) outreach interventions and activities for Brgy. Ilongbukid and adjacent communities in San Rafael, Iloilo based on recently obtained cross-sectional data vis-àvis the 2006 and 2012 baseline results. The “post-test” or the “one shot” survey design and focus group discussion with key stakeholders were done to measure the qualitative and quantitative changes brought about by outreach implementation. Results showed that the awareness level on the CPU outreach activities was high but availment of the services among the respondents was low (18.0%) since only households with children enrolled at Ilongbukid National High School were reportedly prioritized. Those who benefited from the outreach activities claimed definite satisfaction or satisfaction. Most of the respondents (90.6%) considered the outreach activities to be important. The great majority of the respondents (94.6%) believed that the CPU outreach activities had positive impact in their barangays. Specifically, the residual earnings from the swine chain dispersal project helped finance the children’s education, contributed to house improvement, provided basic needs, and increased household income.

This study was conducted to document the process of making rice wine called ‘pangasi’ by the Panay Bukidnon indigenous people (IP) in Tapaz, Capiz. Specifically, it aimed to describe the ingredients and procedure used and to compare them with other rice wines made in the Philippines. Likewise, it also aimed to describe and discuss the emerging themes deduced from documenting the making of ‘pangasi’ rice wine by the Panay Bukidnon IP. Information were collected through direct observation and semi-structured interview gathered from key cultural informants who were also the participants in the focus group discussion. They are members of the Council of Elders of the Tapaz Indigenous People’s Organization (TIPO). The information gathered were cross-checked with existing literature of documented traditional wine making from different areas in the Philippines.The indigenous rice wine, ‘pangasi’ used by the Central Panay Bukidnon Indigenous People in Tapaz, Capiz is different from the ‘pangasi’ made by the Subanons in Zamboanga del Norte The main ingredient used in making ’pangasi’ of the Central Panay Bukidnon (IP) is ordinary, non-waxy, upland rice while the ‘pangasi’ of the Subanen indigenous people of Zamboanga del Norte, makes use of cassava tubers as the main ingredient and a starter consisting of a concoction from 24 to 60 species of plant herbs, as reported by Nabua (2013). However, it is similar to’ pangasi’ or ‘gasi’ which is a traditional drink among the Subanuns of Mindanao, made also from rice with added crushed ginger root and red hot pepper, but water is added to it. It is almost the
same as ‘pangasi’ made from rice in North Western Mindanao, specifically in Bukidnon, in a study cited by Sanchez (2008) from Sakai and Caldo (1985b). However, they reportedly used sugar solution which is added for the second stage of fermentation instead of sugar cane juice, which is used by the Central Panay Bukidnon IP in Tapaz, Capiz. The use of leaves in the processing of ‘pangasi’ which included, ‘adgaw’, ‘talus’, and young coconut leaves have not been mentioned in earlier related studies. However, regarding their local knowledge on cleanliness and sanitation, it is believed that these leaves are naturally clean, especially if they are ‘ugbus’ or young, and have not been too exposed yet in the environment. Indigenous women have an important role to play in using and preserving this valuable local knowledge. They just have to be better recognized and supported by the community. The value of ‘’pangasi’ is much more than just a traditional drink one can hold in his hand, rather it is one that holds the indigenous community altogether. Aptly described by Fox (1984) as having this social and ritual value, the use of rice wine may be seen as a powerful integrating force which links and binds the individual to the group (Fox, 1984). The local knowledge of the Panay Bukidnon (IP) in making ‘pangasi’ is comparable to the other local knowledge of other indigenous cultures in the Philippines. They just need to have it standardized so that their practice will no longer be always as per ‘estimate’ basis but would be quantifiable or in terms of measured quantities so as to yield a consistent, quality product.

Due to lack or no specific documented evidence of traditional cooking method and practices of Central Panay in the indigenous community of Tapaz, Capiz, their cuisine is handed down through an oral tradition, recipes and food wisdom from expert tribal leaders to the younger generations through demonstrations and verbal instructions. Indigenous foods, are ethnically peculiar food choices. The methods which these foods are prepared and served are unique. It can survive the challenges of development by empowering the local tastes and documentation. The study in documenting Traditional Cooking and Practices in Central was conducted in Brgy Sinonod, Tapaz Capiz. The said barangay is the last frontier of indigenous community which had not been reach by industrialization and modernization. The study was made possible through the tribal leaders representing the following barangay; Brgy. Mato-bato, Brgy. Sinonod, Bgry. Tacayan, Brgy. Maliao and Brgy. Rizal Norte. This research paper utilized a semi-structured interview compared with existing literature. Information were collected through direct observation and semi-structured interview. With limited immersion time, important information was gathered from the key cultural informants. An actual interview and focus group discussion had been used to collect information. A Digital recorder and camera were utilized to transcribe information for proper documentation and data analysis. The guide questions were formed as the bases of the inquiries, which were centered on the following: identification of ingredient, their distribution, seasonal availability and cultural usage. In documenting the interview, the interviewee has been given the option to decline the interview process. The time spent had been around four days to establish rapport and interaction with indigenous people specially those belonging to the older generations and acquire knowledge in indigenous cooking methods. The respondents had been given a chance to review the finding of the study for consistency and validity in the recently concluded IP Week Celebrations 2017. Thematic Analysis had been used in analyzing the data collected. Information gathered had been categorized according to emerging themes in occasion, rituals, preparation and presentation. The Indigenous cooking will becomes richer and it can provide livelihood and financial opportunity to the community. The Indigenous Cooking Methods of Central Panay revolves on Binakol and Tinum-anan, it depicts a simple way of preparing, cooking and presenting their food that would compliments their daily life activities and cultural identity. Thus, pursuant to Republic Act 8371 chapter VI with regards to the Protection of Indigenous Culture, Traditions and Institutions, this research on Indigenous cooking of Central Panay, Tapaz, Capiz had been conducted.

College students reported to have experienced high level of stress during their academic year. Studies within and outside the country have examined stress among students but there is no local studies addressing nursing students’ stress in the clinical area. Therefore, this study was conducted to assess the stress level and sources of stress in clinical practice as well as to identify the coping behavior utilized by nursing students. A combination of qualitative and quantitative approaches was used. The study involved 153 nursing students and 10 students participated in focus group discussion (FGD). Data were analyzed with the use of descriptive and inferential statistics. FGD was used to supplement and complement the survey findings. Findings revealed that most of the students in this study were 19 years old or younger, female and second year college and had moderate level of stress. The most common stress factors were stress from assignment and workload, and stress from taking care of patients. Students used diverse strategies to cope with stress with problem solving as their most common coping strategy. This study concluded that nursing students suffered from stress. The study found no significant relationship between level of stress and coping behavior. Four themes have emerged from the study: (1) initial clinical anxiety, (2) theory-practice gap, (3) clinical supervision, and (4) professional role. They cope by having support system composed of their families and friends; prayers; avoidance and escape the situations, diversional activities and self-control. A comprehensive program for students should be developed to reduce stress and to utilize healthy coping strategies to enhance health promotion.