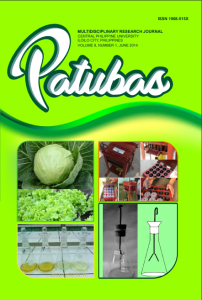 Copyright © 2014 by individual authors and Patubas.

Two studies were conducted at CPU campus, Iloilo
City from October 2009 to April 2010. The first one
compared the effects of IMO-5, commercial compost,
leaf green manures and inorganic fertilizer. Plants
without fertilizer served as basis for comparison. The
second study evaluated the growth and yield of
pechay and lettuce in pots with residual fertilizer.
Pechay was used instead of cabbage because of its
shorter growth period than cabbage. The treatments
consisted of acacia (Albizia saman (Jacq.) Merr.) (T1),
ipil-ipil (Leucaena leucocephala (Lam.) de Wit) (T2),
and madre de cacao (Gliricidia sepium) (Jacq.) Walp.)
(T3) leaf manures, IMO-5 (T4), and commercial
compost (T5). The inorganic fertilized (T6) and
unfertilized (T7) plants served as positive and
negative controls, respectively. These were laid out in
randomized complete block design with three
replications. Results from the first study showed
significantly most leaves from fertilized lettuce except
those added with madre de cacao. Likewise in
cabbage, the fertilized plants were significantly taller
and produced significantly more leaves than the
unfertilized. Lettuce and cabbage with inorganic
fertilizer, however, recorded the highest return on
investment (ROI) of 89% and 125%, respectively. 2
Results from the second study revealed that lettuce
grown in soil with residues of green manures and
commercial organic fertilizers had more leaves, were
taller, and out yielded the unfertilized plants and
those previously applied with inorganic fertilizer.
Results further showed that pechay with different
manures had statistically similar leaf count and height
but had significantly outperformed those with
inorganic fertilizer (T6) and without fertilizer (T7).
However, lettuce and pechay with residues of compost
(T5) showed the highest ROI of 411% and 318%,
respectively. Based on the results of the first study, it
is concluded that it is profitable to use inorganic
fertilizer (T6) in lettuce and cabbage production.
However, it was the residue from commercial compost
(T5) that sustained soil productivity and profitability of
the second crop.

Commercial cooking oil sample (Refined, Bleached and
Deodorized-Coconut Oil or RBD-CNO) was subjected to heat
treatments. Twelve samples of four treatments and three
replicates for each treatment: namely, the untreated (UN),
heated once (T1), heated twice (T2) with intermittent cooling
and, heated thrice (T3) with intermittent cooling were
analyzed for fatty acid profile, free fatty acid value, peroxide
value and the presence of PAH. Data were statistically
analyzed using one way analysis of variance (ANOVA).
Significant treatment mean differences were established using
DMRT. The fatty acid profile showed that only linoleic acid
decreased in quantity constantly up to the third heating. Free
fatty acid and peroxide values showed an increasing trend. All
of the 22 PAH included in the analysis were present in all
treatments in small quantities. The only PAH which showed an
increasing trend in the 4 treatments was 1,6,7-
trimethylnaphthalene, the quantities of the rest remained the
same. The decrease in the amount of linoleic acid in the free
fatty acid profile indicated that unsaturated fatty acids
decompose on heating and this could be the source of
peroxides, but saturated fatty acid components were stable at
high temperature.

TECHNICAL AND ECONOMIC EVALUATION OF THE JACK-DRIVEN BRIQUETTING MACHINE

This study was conducted to evaluate the technical and
economic performance of the designed briquetting machine
that utilizes a hydraulic-type bottle-jack for better
compression in producing briquettes. The machine can
compact 16 cylindrical (with a hole at the center)
briquettes in one pressing or about 200 to 240 pcs/hr. The
jack creates the needed pressure by thrusting the molders
up to fully compact the materials. With the aid of one
spring on both sides, which jointly holds together the
molder and jack flooring supports, the piston of the jack
when loosened is pulled back to its normal position
allowing a semi-automatic type of operation. The
briquettes produced by the machine functioned well as fuel
when subjected to cooking and boiling tests indicating its
potential as alternative source of energy. This was also
highlighted by a higher percentage (81%) of willingness by
waste reclaimer-respondents to buy them as fuel for
various cooking and heat applications. The production cost
per hour for briquettes ranged from about Php32 to Php34
or Php0.13 to Php0.16 per briquette. Leveling-up of
operation may even increase production giving annual
potential earnings of about Php29,000.00 to Php69,000.00.
The quality of the three briquettes produced slightly varied
and some of the parameters analyzed like bulk density,
heating value, moisture, N and S closely met or have met the
requirements of DIN 51731.

CONSTRUCTION AND TESTING OF AN IMPROVISE LEAF ELECTROSCOPE (ILE)

This study aimed to construct and test the improvised leaf
electroscope (ILE) for Physics Laboratory experiments. It
was only limited on the construction and testing of ILE. The
finished products replaced the existing electroscope and
provide hands – on learning experience to the students.
The Improvised Leaf Electroscope was made of Erlen Meyer
flask as chamber. Its major parts were the following: a)
the metal rod which will serve as the stem and the knob b)
cork stopper which will hold the aluminum leaves mounted
on the metal rod, and c) aluminum foil which will serve as
the leaves. The materials needed are locally available and
less expensive. Nine samples of ILE were constructed in
order to test which samples can produce the highest
approximate angle of deflection. Three various ways of test
were made with three trials for each testing. Results
reveal that copper rod is the best metal stem to use with
an approximate measured angle of deflection of 260
. The
appropriate length of the rod is 6 inches with 460
approximate measured angles of deflection. And the
suitable width of aluminum leaves is 0.5 cm with 300
approximate measured angle of deflection. In order to
improve the operation of the ILE, it is highly recommended
to produce a good quality of plastic rod and woolen cloth in
order to attain maximum results and not to depend on the
imported rod and cloth.